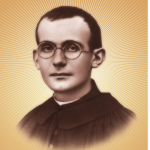 Fr. Justin Russolillo was born and baptized in Pianura (Naples) on the same day, January 18, 1891.  God chose him to be the Apostle of the Divine Union, of Vocations and Universal Sanctification.  From his early childhood, he showed an awareness of the great mission to which God had called him.

After completing Grammar School in his hometown, he entered the Seminary of Pozzuoli, where he distinguished himself for intelligence, humility and piety.  Bishop Zezza and Marquis Zampaglione were glad to pay the Seminary tuition for such a brilliant and pious seminarian.

On September 20, 1913, Justin was ordained a Priest.  While kneeling before the Bishop for the ordination, he vowed to the Lord to found a religious Congregation dedicated to cultivate vocations to faith, priesthood and holiness. For this he lived, suffered and died.

As a Priest, he intensified the work that he had already begun as a seminary student.  When he was appointed Pastor of Pianura on September 20, 1920, he soon started working for the realization of his mission; on October 18 of the same year, the first Community of the Vocationist Fathers came into being at the Rectory of St. Georges’s Parish.

The two Vocationist Communities had endured many difficulties, but God has been good to them, always blessing them, assisting and guiding them over the years.  The Vocationist Fathers and Sisters rapidly spread throughout Italy, France, Brazil, Argentina, United States. Later, they reached Nigeria, India, Philippines, Indonesia, Madagascar, Columbia, Ecuador, Chile and England.   Wherever they went, their main goal was the search and cultivation of Vocations, especially among the poor and the underprivileged.

While providing the needed assistance to his religious communities and serving the people of his parish, Father Justin dedicated himself fully to a life of prayer, contemplation and action.  He was untiring as well in the ministry of the Word of God, preaching often two to three times a day.

The Blessed Trinity, the Holy Family of Jesus, Mary and Joseph, and the Mother Church were the source and center of his spirituality and of his multiple ministries.

Father Justin completed his earthly mission on August 2, 1955, comforted by the sacraments of the Church, the Papal Blessing and the prayerful presence of many of his religious.

Since Father Justin’s death, his tomb has attracted thousands of visitors in quest of guidance, help and peace of mind.

As the devotion to the holy and humble pastor of Pianura spread and intensified, the Vocationist Fathers unanimously decided to petition the Congregation for the Causes of the Saints to initiate the process of his Sanctification.

The petition was readily granted on April 3, 1978, and on January 18, 1998 Pope John Paul II officially declared that Father Justin had practiced the Christian virtues in a heroic manner. Therefore, he was being raised to the dignity of VENERABLE.

On May 7, 2011, Father Justin was declared BLESSED at 3PM in Pianura (Naples), Italy by Cardinal Amato with the apostolic blessing of Pope Benedict XVI.