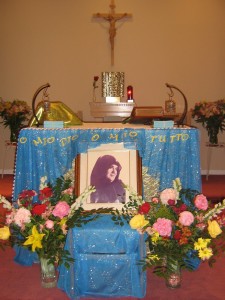 The Vocationist Sisters of  Florham Park, Newark, Palisades Park and Martinsville gathered as one family on Sunday, June 24, 2012 to celebrate God’s goodness and love. They thanked God in a very special way for the precious gift of Mother Giovanna Russolillo, Co-Founder of the Vocationist Sisters

Mother General of the Vocationist Sisters Giovanna Russolillo was born in Pianura, Italy on June 22, 1895, she was the fifth of 10 children, baptized two days after her birth, and flourished under the loving and vigil watched of her parents Luigi Russolillo and Giuseppina Simpatia.

From the age of 6 to 12 years, Giovanna frequently went to elementary classes, alternating, the study, with the humble service of doing domestic housework.  She was always close to her brother Justin in every apostolate.  Giovanna shared the dreams of her brother and partook in the sacrifices and renunciations required for the support of Vocations, which had already started to surfaced.

In 1922, Giovanna felt called to the Religious life and so courageously returned to school in order to continue her studies. Even though she was much older than her classmates this did not deter her from her goal.

In 1924, after the idea of founding a new Congregation had already matured in Father Justin’s mind, Giovanna decided to follow her vocation and help her brother’s dream to materialize. Thus, she together with the other aspirants who were cultivating religious ideals under the leadership of Rachele Marone started taking courses in pre-school education. These additional studies were aimed at preparing them to better serve the vocation work that Father Justin had designed.

In May of 1927, the original “Pious Union” was approved as a Congregation of Diocesan Right, and on August 12th of the same year the few members of the newly born Congregation elected Sister Giovanna as their Superior General.

In September 6, 1939, at the first meeting of the General Chapter, Mother Giovanna was re-elected as Superior General with the unanimous votes which shows that she was a living witness of the esteem and love that everyone had for the Founder’s sister as well as an acknowledgement of her leadership qualities and of her capability to direct the congregation.

In April 23, 1945 Fr. Serafino Cuomo, was appointed by Romeas Apostolic Visitor and Superior General of the Congregation. During this time the Reverend Mother Giovanna, humbly and in a spirit of prayer, stepped aside until November 14, 1946. Fr. Cuomo at the end of his mission obtained a decree from theVatican re-establishing Mother Giovanna as Superior General.

When the Constitutions were approved with a Decree on March 24th, 1946, a new General Chapter was held on October 2, of the same year. Mother Giovanna was re-elected as Superior General. By this time the Vocationist Sisters had already established fifty Religious Houses.

The following 5 years were a time of real Pentecost. The Religious Congregation of the Vocationist Sisters grew spiritually and in so doing felt ready to carry, for the first time, the message of Fr. Justin to foreign lands.

However, a violent storm was at the door. It would soon hit the Congregation in a devastating manner as a result of some administrative errors. Consequently, the governing of the Congregation, directed up until this point in time by the Reverend Mother Giovanna.

During this time the General Chapter was suspended. It was also during this dramatic period that the virtues of Mother Giovanna became more evident.

The Reverend Mother Giovanna quietly continued taking care of the spiritual progress of her Religious Sisters without ever surrendering to depression. She answered all questions from her Religious with brevity, never partaking in any criticism of others in matters that regarded the administration of the Congregation.

Finally, with a very maternal and zealous spirit, Mother Giovanna collaborated with the work of the last Religious Assistant, a Vocationist Father, appointed by the Sacred Congregation for Religious on March 15th, 1962. With his help, she succeeded in bringing total satisfaction to the indebtedness of the Congregation under which all the members had agonized for fifteen long years. The spirit of her Religious, however, had remained intact and their determination to rise and move ahead had become unquenchable.

The time that Mother Giovanna had been dreaming of had become a reality. Within this relatively short period of time the Vocationist Sisters counted sixty-three Religious Houses scattered throughout thirty Dioceses in three Nations.

Mother Giovanna wanted to lead the Vocationist Sisters in the perfect observance of the spirit of the original Founder, Blessed Justin Russolillo. This was to be their most important objective, encompassing their living and their working. On May 25th, 1969, Pentecost Sunday, he called her soul back home in heaven.

This ends the life of Mother Giovanna Russolillo but her life will always continue in the life of many “Vocationists” around the world. As we strive to live the spirit of Fr. Justin and lead all those who long for the Divine Union of the Universal Sanctification, let us work together, pray together, and love as Mother Giovanna and Fr. Justin did and be Holy as Fr. Justin asked us to be.  Jesus, Mary and Joseph!